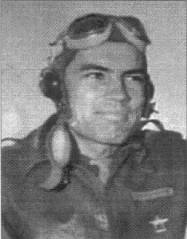 NOTE: I have replaced the original images in the article with much better copies. JW

Capt. Thomas F. Mantell, Jr., 25, was “climbing into the sun” after what he thought was a flying disk shortly before he was killed in a plane crash near Franklin, Ky., Wednesday.

So reported two of Mantell’s buddies in the Kentucky Air Guard, who were in the air with him at the time. The Air Guard yesterday said Mantell, World War II hero, who lived at 6301 Third, died because he flew too high while chasing an aerial object.

Capt. R. L. Tyler, Louisville operations officer for the Air Guard at Standiford Field, said investigation convinced him Mantell had “blacked out” from lack of oxygen at 36,000 feet. Tyler theorized the plane went into a dive and began to disintegrate at 15,000 feet.

Two other Air Guard officers who were flying in formation with Mantell in P-51 single-seater pursuit ships told of the high altitude disk-chasing mission.

Both said they “peeled off” at 22,500 feet with Mantell “still climbing into the sun.”

National Guard headquarters here said Mantell and his companions were asked by the Fort Knox radio to “look for” an object resembling a “flying saucer” reported sighted southwest of Godman Field.

Only One Had Oxygen Gear.

Only one of the trio, Lt. A. W. Clements, 2123 Ratcliffe, had oxygen equipment. Captain Tyler said oxygen had not been issued generally to the guardsmen because they were training at comparatively low levels.

The three, along with Lt. Robert Hendricks, were returning from a routine flight to Atlanta. Clements said Mantell apparently picked up the Godman Field radio signal as they neared Fort Knox and changed his course. Clements and Lt. B. A. Hammond, 3117 Sonora, followed. Hendricks, however, flew on to Standiford Field.

Mantell and Clements were linked by radio, but Hammond’s communications set was tuned to a different frequency.

Clements said Mantell informed him they were to look for something “but didn’t seem to know exactly what it was.” Soon, Clements related, Mantell shouted through the loud speaker, “Look, there it is at 12 o’clock.” Clements said this meant it was “right over our nose.”

Clements gazed straight ahead and saw a “bright shining object that looked like a star.” He and Mantell started after it.

Hammond, who had received no word of the flying saucer, was bewildered.

“At first I thought we were lost,” he said. “Then we started climbing and I assumed we were looking for Louisville.” Hammond was depending on Mantell and Clements for navigation and went on up with them to avoid losing his bearings.

“By the time I hit 22,000 I was seeing double. I pulled alongside Clements and indicated with gestures that I didn’t have an oxygen mask. In fact I circled my finger around my head to show him I was getting woozy. He understood the situation and we turned back.”

Neither saw Mantell crash. His plane ripped down out of the sky some 80 or 90 miles from where they changed course after learning of the disk, Clements estimated.

Eyewitnesses had reported seeing Mantell’s plane arc high in the air and Tyler said this indicated Mantell, an expert pilot, was unconscious at the time.

Clements, 25 and Hammond, 23, both World War II veterans, landed at Standiford Field. Clements, who won the Distinguished Flying Cross in North Africa and Italy, refueled and took off in search of the “disk” again but failed to spot it.

Recalling the appearance of the object, Clements remarked, “The more I think about it the more I’m convinced it was a star or some other type of celestial body.”

Some reports indicated the object may have been a weather balloon. An object seen near Nashville was identified as a balloon from which a rope was dangling. Two pilots at Hopkinsville, Ky., also said that they followed a flying object and believed it was a balloon. At the Madisonville weather station it was reported that Northwestern University, Evanston, Ill., had sent up 21 weather-observation balloons.

Back to Mantell Directory Page