The experience of Lonnie Zamora on April 24, 1964 stands as one of the most profound ufo events in the modern history of the phenomena. To this day it remains a case in which all the facts involved support the witnesses claims, and it is the kind of case that makes the ufo phenomenon such an enduring mystery . Lonnie Zamora saw a highly unusual device of unknown origin, what can only be described as a "craft" of some kind, and he reported seeing what he believes were occupants. Despite the controversy which often surrounds the subject of UFOs, the incident at Socorro remains a classic example of what the UFO phenomenon is, in fact, all about.

The following information is based on facts I have gathered from various sources including conversations in person and by telephone with Mr. Lonnie Zamora. This is not intended to be a complete report on Lonnie Zamora's experience. It is intended to provide a source for some fresh details about the case and to clarify others. More than anything else I have made every effort to ensure that what is here is the truth. I also owe a great deal of gratitude to Mr. Ray Stanford, one of the most thorough and knowledgeable investigators I have met. He arrived in Socorro within four days of the incident and authored the definitive book on Zamora's experience and the subsequent investigation. I recommend it to anyone seriously interested in this case and in the subject of UFO's in general. ""Socorro Saucer" in a Pentagon Pantry" is available in major libraries, and can also be obtained directly from the author. Check HERE for the address.

Socorro is a small town located about an hours drive south of Albuquerque, New Mexico . In April 1964, Lonnie Zamora was a police officer with Socorro, and late in the afternoon on April, 24th he had just dropped his pursuit of a speeding car to go check on what he thought might have been an explosion on the outskirts of town. Thinking that a small shack containing dynamite might have exploded on the outskirts of the town, he made his way up a rough embankment and began moving slowly along a narrow gravel road that ran beside a small arroyo (a shallow dry gully). From this vantage point, in the distance he saw what he thought might have been an overturned car down in the arroyo. He radioed back to his headquarters that he was going to check it out. It was from this same point that he saw what he described as two children or small adults near the vehicle, and he noted that one of them appeared startled at his approach and seemed to "jump somewhat".
(Map of the area)

He drove further along the gravel road and finally stopped his car at a position that he thought was close to where he had previously seen the vehicle in the arroyo. It was at this time that he heard what he would later describe as several loud "thumps" or "slams" similar to metal hitting metal. Leaving the patrol car and walking towards the gully, he had not gone more than a few steps before he had a full view of an elongated oval shaped object on "girder-like" legs. In that instant there was a loud roar and a bluish flame shot out of the underside of the object. Zamora did not hesitate...he hit the ground thinking it was about to explode, but then got up running and jumped down on the other side of the gravel road. He heard a whirring noise and watched the object rise up out of the arroyo. The legs he had seen moments before were no longer apparent. He watched the object rise to perhaps 20 feet above the bottom of the gully when suddenly the sound stopped completely. The flame was no longer visible, and as he watched, the now-silent vehicle moved off traveling parallel to the ground and picking up speed as it left the area. He kept watching it as it moved farther and farther away and eventually disappeared from view.

Almost immediately Zamora got on his car radio and excitedly called the dispatcher hoping that someone else might be able to see the object. Just as quickly, State Police Sergeant Sam Chavez, who had heard Zamora’s frantic call, arrived on the scene. Together, Zamora and Chavez noted the evidence left in the arroyo...a half burned bush, four angular impressions in the sandy soil where the "legs" had been, and several small footprints and other impressions. 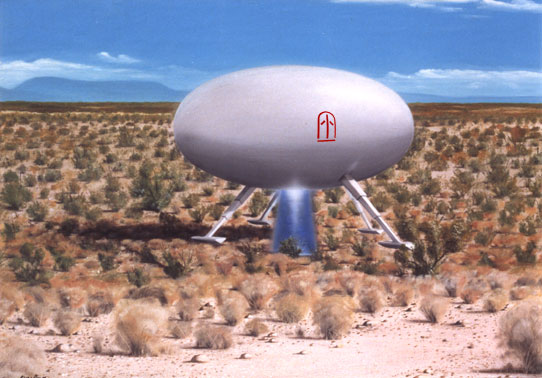 Ever since the first report that Zamora had seen some type of symbol on the side of the craft, there has been some confusion about just what that symbol was. He had drawn and described this symbol to several people soon after the incident, and what appeared to be discrepancies in his description arose from various sources. There does appear to be some support for believing that the symbol that was widely circulated early on may have actually been a variation of the true one. The idea that investigative personnel from the Air Force or other governmental agencies may have circulated a substitute as a way to guard against copycat reports has some merit. Though the actual shape may not be ultimately important to the overall case, I did make an effort to try to obtain an honest description of just what Zamora saw. In one of our telephone conversations he clarified to me that he had never been told not to relate the actual shape. However, he then gave me a description that I realized was slightly different from any I had heard and seen before. I was curious about this and shortly afterward I sent him several pages of small sketches that covered various details of his sighting. I included several variations of this symbol, along with one that matched what I had seen in other places and another that matched what I thought he had described to me. I asked him to place a check mark by whichever sketch matched his recollection. Below are several sections of the sheets I sent him, and his check marks are visible. However, in the section showing the symbols, he was nice enough to actually redraw what he had seen.

Of all the evidence that could be presented to support the contention that what Lonnie Zamora saw was something totally unexplained, perhaps nothing is more compelling than this brief article. It appeared in the formerly classified CIA publication entitled "Studies in Intelligence" from the fall of 1966. It was written by Hector Quintanilla, Jr., the former head of the Air Force's Project Bluebook.

It gives a history and methodology of the Air Force's investigation of UFO's, and after presenting many of the prosaic explanations that had been encountered, he concluded his article with a synopsis of a "Policeman's Report" in which he described the Socorro incident. One short quote from this article in itself makes a profound statement about the reality of some UFO reports.

This document was approved for release on January, 2, 1981 and is available to anyone under the provisions of the Freedom of Information Act.

It is my hope that this information is useful to anyone wanting to know more about the subject of unidentified flying objects. Even I find it easy to become disillusioned at times when I find that almost all the readily available information is made up of fantastic claims made by people who offer no valid proof. However, anyone who looks closely will be able to find that there are many cases, like the Socorro incident, that clearly indicate something physically real, and of a high degree of strangeness, is being seen by honest, reliable witnesses.